Confused about how Webpacker works in Rails? Let's unpack it with some diagrams.

Struggling with webpack and Webpacker?

HTML request with the asset pipeline 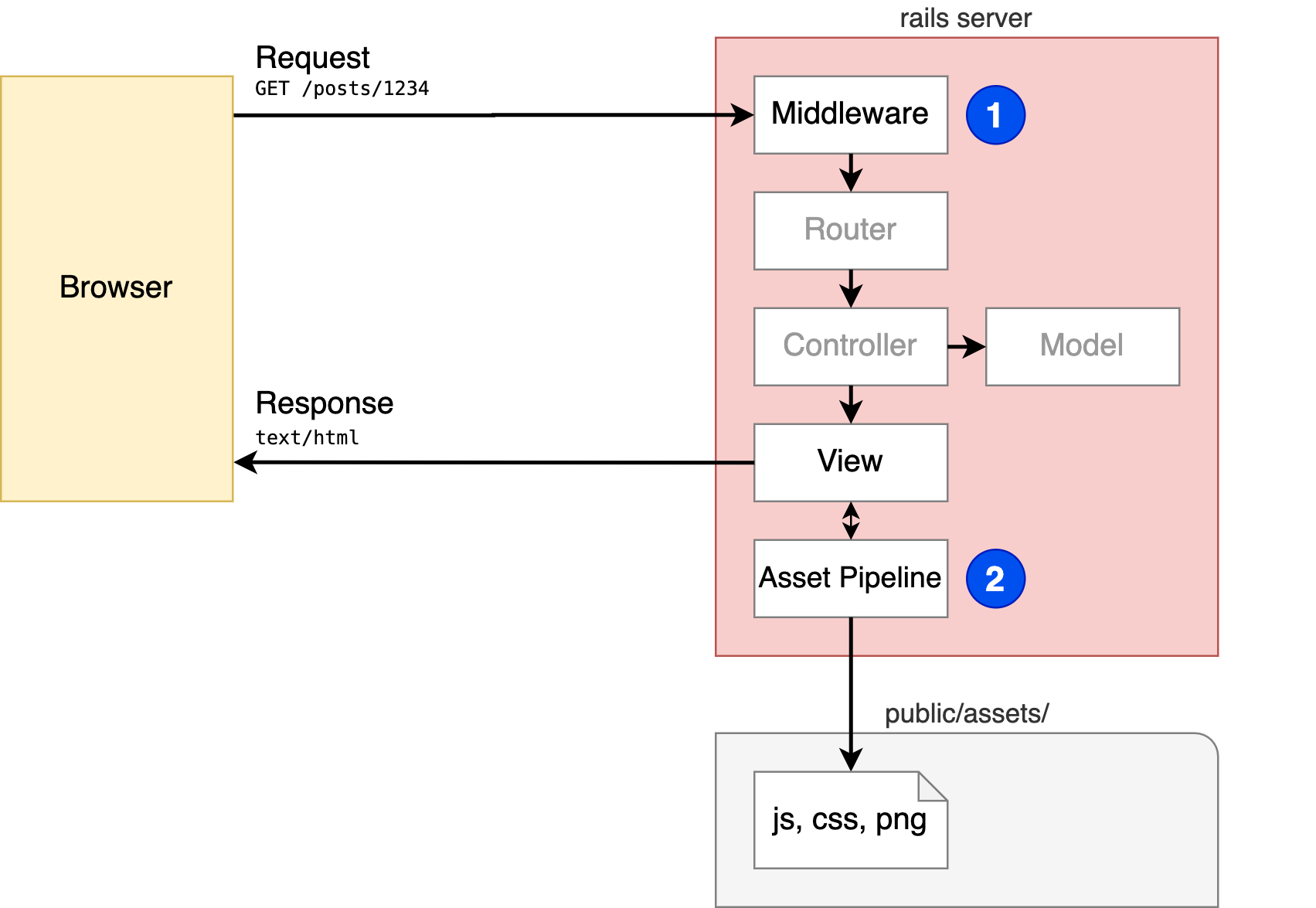 With the asset pipeline, when an HTML request is processed (1), bundling takes place within your Rails server (2). The asset pipeline is responsible for creating the bundled assets in the public/assets/ directory and providing URLs to those assets to be rendered in the View.

Note: Please consider the diagrams in this post as approximations of how the pieces fit together. Much of the detail has been omitted for simplicity and to draw attention to the salient aspects.

Asset request with the asset pipeline 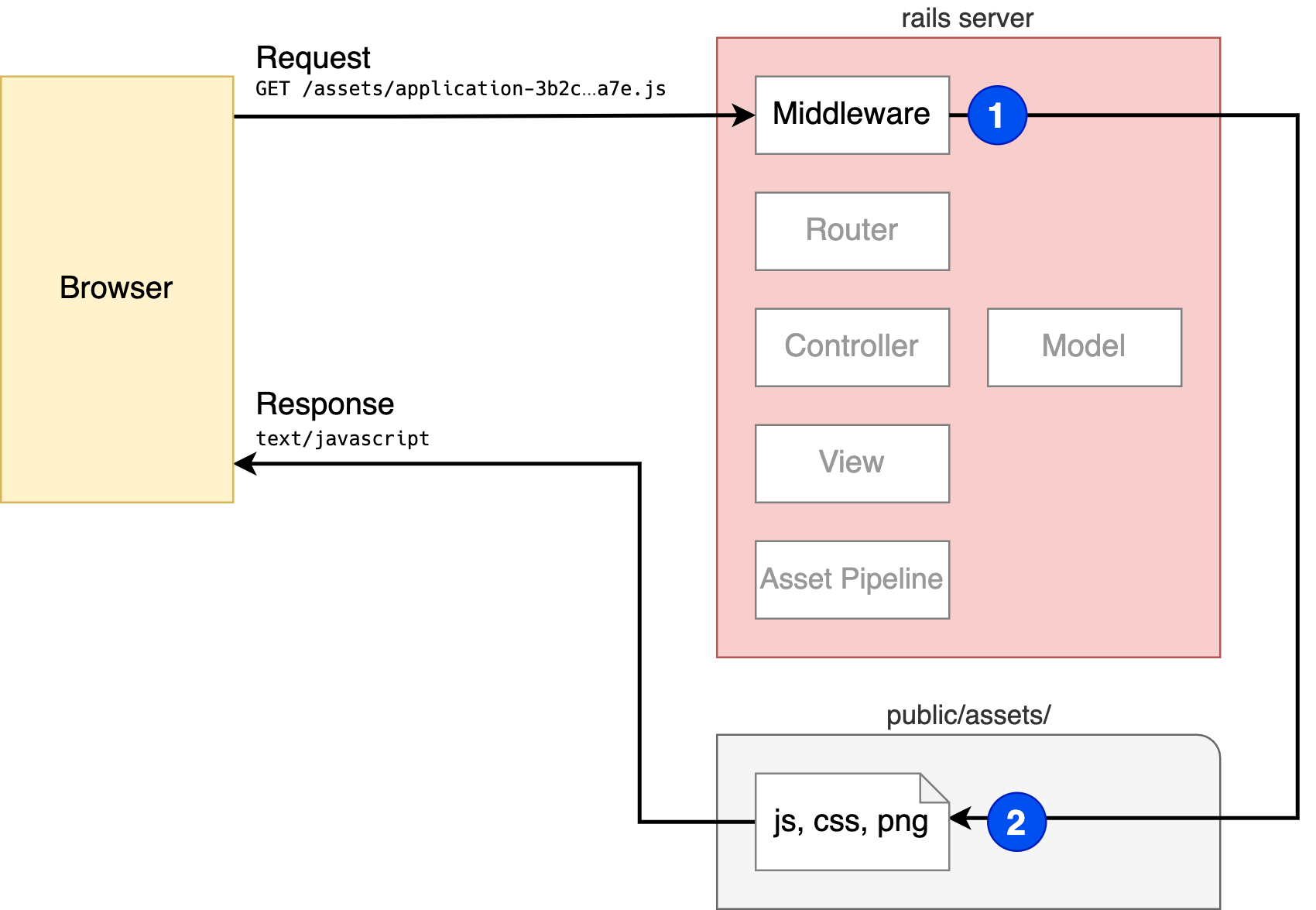 As the browser parses the HTML response and finds that script tag, it must make an additional request to fetch the linked JavaScript resource from your Rails server. This time, the request is processed by (1) the ActionDispatch::Static middleware, which recognizes the asset lives on disk in the public/assets/ directory (2).

While the Rails asset pipeline lives within the Rails server process, webpack, as you may know, is written in JavaScript and executes within the Node.js runtime. Therefore, webpack must run in a separate process.

Rails needs some "glue" to help it communicate with webpack. Webpacker provides the glue, which includes:

For the purpose of illustration, we'll focus on how Webpacker works in development. Webpacker supports two development "modes":

This mode is enabled when the compile option is set to true in config/webpacker.yml.

Here's how webpack fits into the picture. 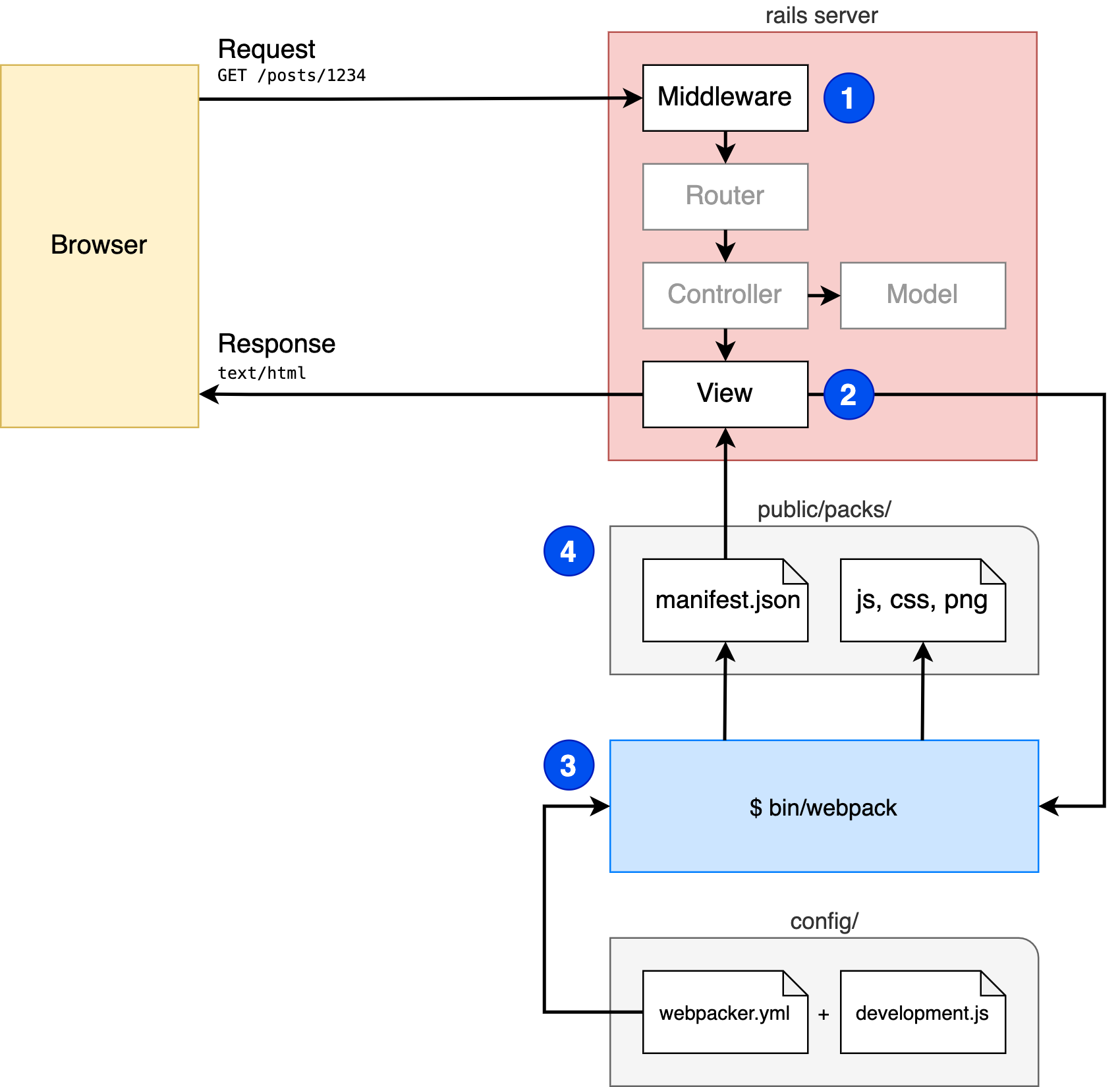 As it processes an HTML request (1), Rails will render the View, including "pack" tags such as the following:

Rails must be able to determine the URL for webpack JS, CSS, and image assets.

To do so, the Rails server will run webpack in a child process if the compiled assets are missing or stale (2).

The webpack config used to invoke webpack, config/webpack/development.js merges settings from config/webpacker.yml and the config provided by the @rails/webpacker NPM package (3).

Executing webpack will generate assets in the public/packs/ directory along with the important manifest.json (4).

The manifest.json file is the key communication point from webpack to Rails: it provides a simple mapping to look up asset paths from their canonical names.

Rails will read this file via the Webpacker view helpers to render the correct URL to the assets. 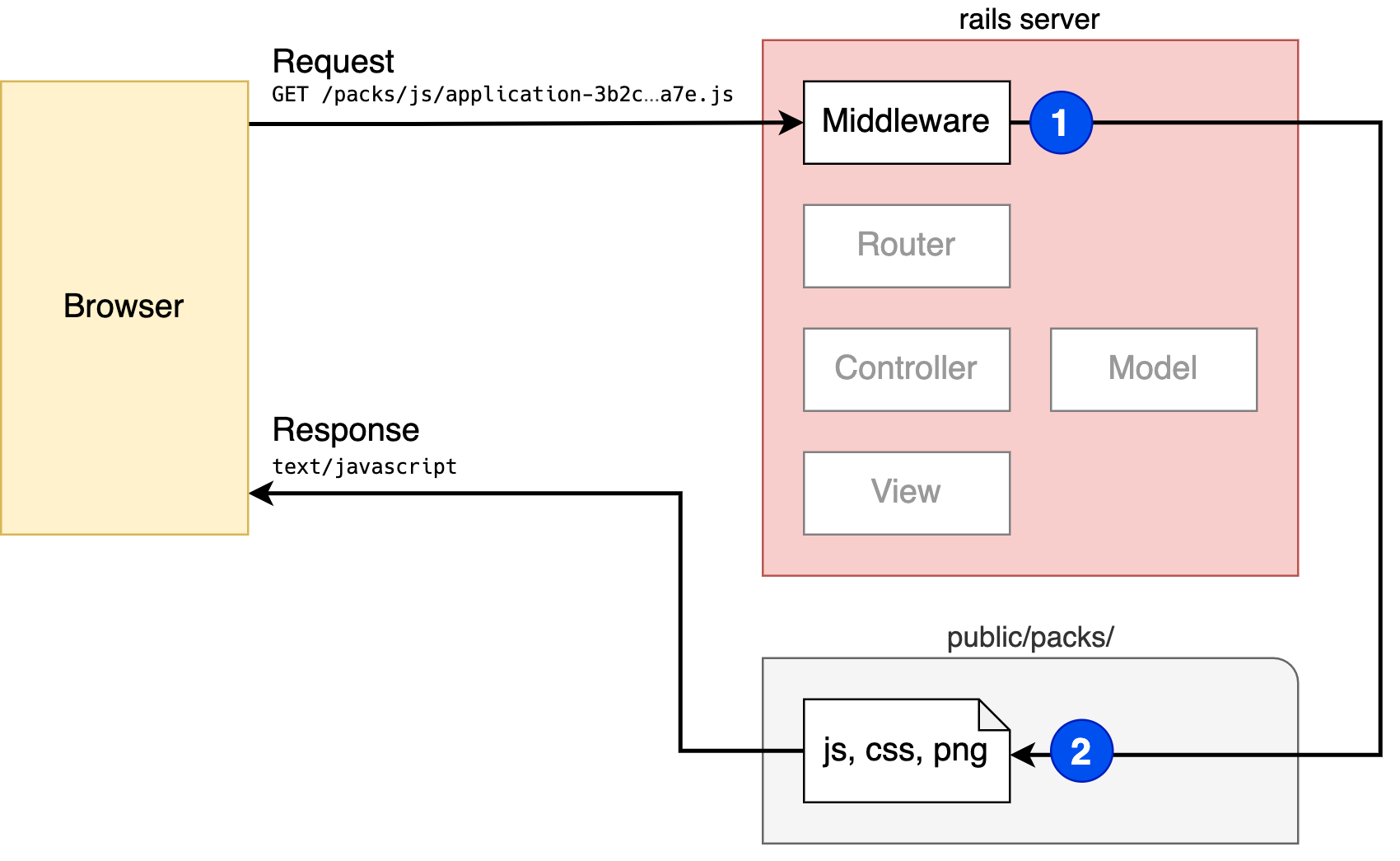 Once the browser has received the HTML response, it must make additional request to retrieve the assets. In "compile-on-demand" mode, this is identical to the asset pipeline:

The ActionDispatch::Static middleware (1) locates the asset on the file system in the public/ directory (2) which is returned to the browser, short-circuiting the rest of the Rails process.

In production, of course, the role of the middleware may likely be played instead by a web server, such as Nginx, and/or a CDN.

The "compile on-demand" mode is similar to using the Rails asset pipeline in that you need only run the Rails server explicitly to get started. In development, I prefer "dev server" mode. This approach involves using the webpack-dev-server as a standalone HTTP server to compile assets and serve asset requests. Advantages include auto-recompilation, live-reloading, and hot module replacement.

Using a tool like foreman or overmind, we can boot up both the Rails server and the webpack-dev-server with a single command using a Procfile such as:

We'll also set the compile option to false in config/webpacker.yml.

This way, Rails won't shell out to the webpack executable if the dev-server is running. The dev-server will be responsible for detecting changes to assets and recompiling automatically.

Let's see how requests are processed in "dev server" mode. 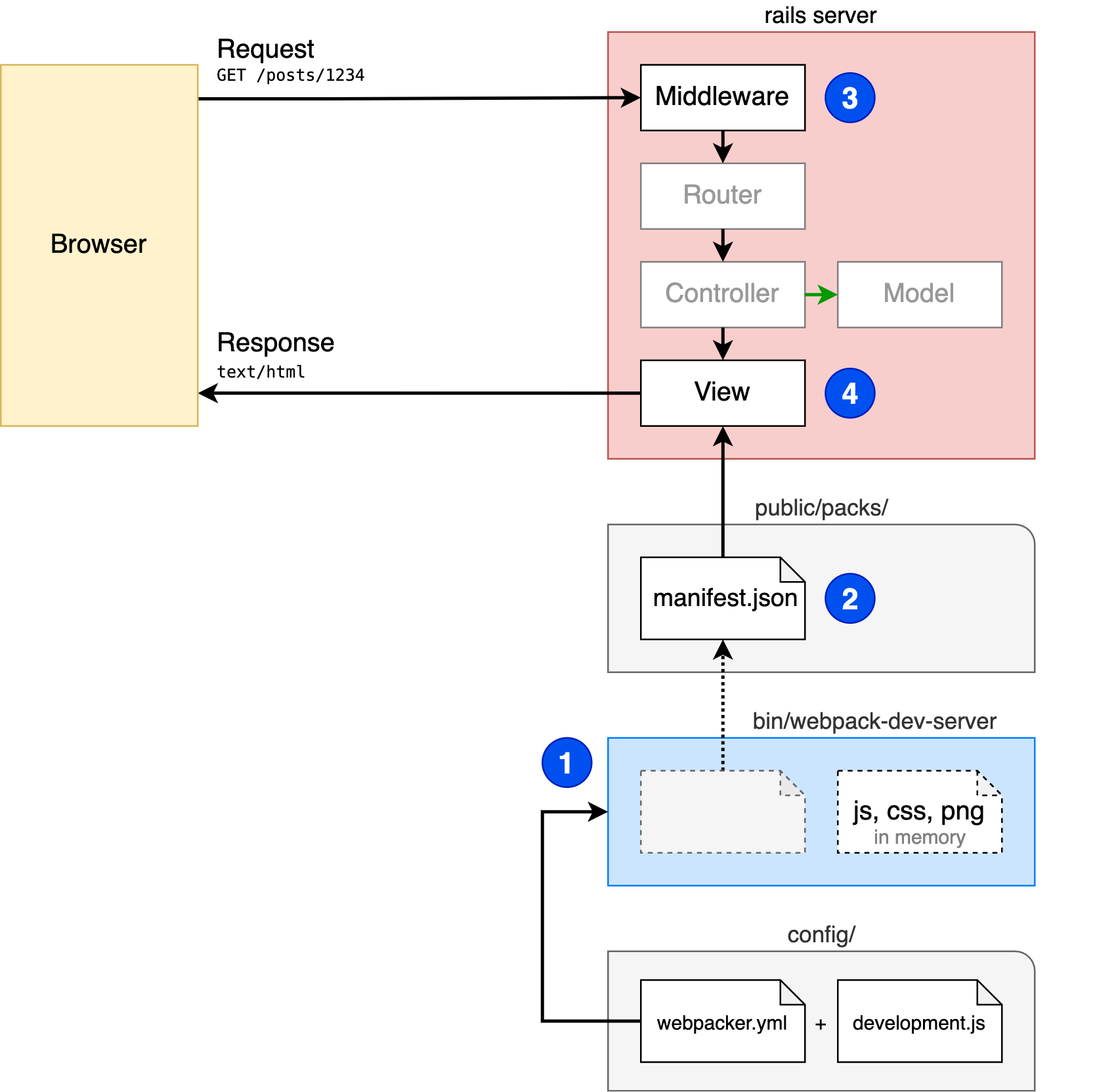 When the dev-server boots up (1), it "pre-compiles" assets in memory, instead of writing them to disk, for performance. It does still write the manifest.json file to disk in the public/packs/ directory (2), where Rails can find it.

As with the other examples, as the request (3) is processed, the View will attempt to render javascript, stylesheet, and image tags. Rails will determine asset URLs from manifest.json (4). If the webpack-dev-server is not running or hasn't finished compiling as the request comes in, you may see the infamous Webpacker::Manifest::MissingEntryError. 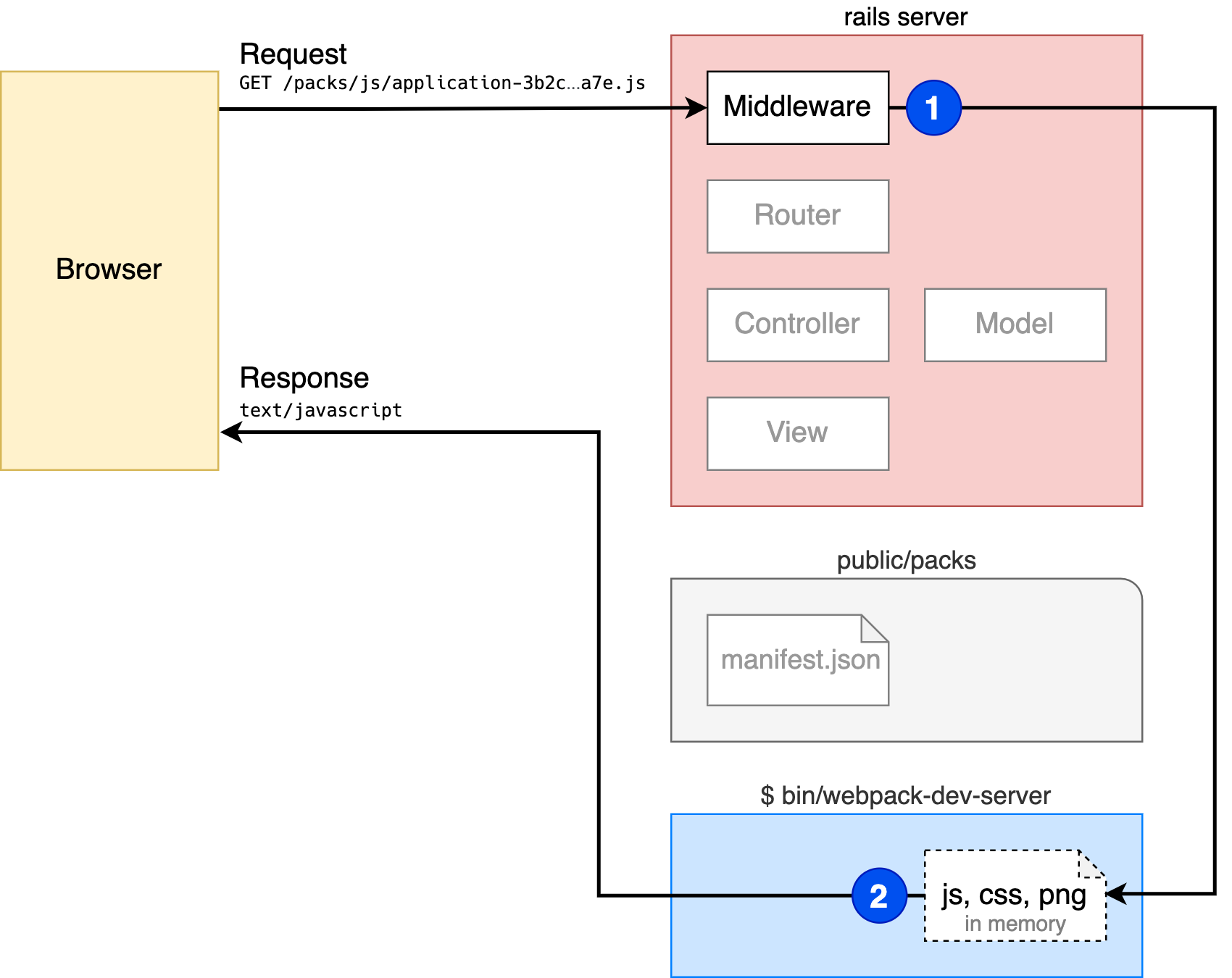 As before, Rails middleware (1) locates the asset, this time, by proxying to the webpack-dev-server (2).

To solve this problem, Webpacker provides its own middleware: Webpacker::DevServerProxy (source). This allows Rails to act as an intermediary between the browser and the webpack-dev-server in development.

As a side note, I'm not entirely sure why the proxy middleware would be necessary. Rails could point asset urls directly at webpack-dev-server by prepending the host, i.e., http://localhost:3035/.... Instead, by default in development, asset paths are produced so that the browser will direct its assets requests to the Rails server. I'm not entirely sure why the maintainers went this direction if only to make it seem more like the asset pipeline from the browser's perspective.

At times, Rails can feel like a black box. I hope these mental maps help make it easier to navigate the world of Webpacker and webpack on Rails with confidence.

A case study of Rails applications making a common Webpacker mistake of rendering modules multiple times on a single page. We'll describe why the problem happens and present a Webpacker Packing Checklist for proper code-splitting.

When running Rails system or integration tests, you might be surprised to learn that Webpacker will load your development webpack config. What's the deal?

In this post, we'll take a look at installing and using the webpack-bundle-analyzer, perhaps the most invaluable webpack plugin, to analyze and debug the output of the webpack build in a Rails project configured to use Webpacker.