Is your Rails app on SSL in production? It may be a good idea to use SSL locally too. It's just that it's typically been a pain to set up for development. Using SSL with Capybara for acceptance tests has traditionally been even more challenging— until now.

In this post I'll demonstrate how I set up my Rails 5 app for local development and system tests over SSL with wildcard domains. 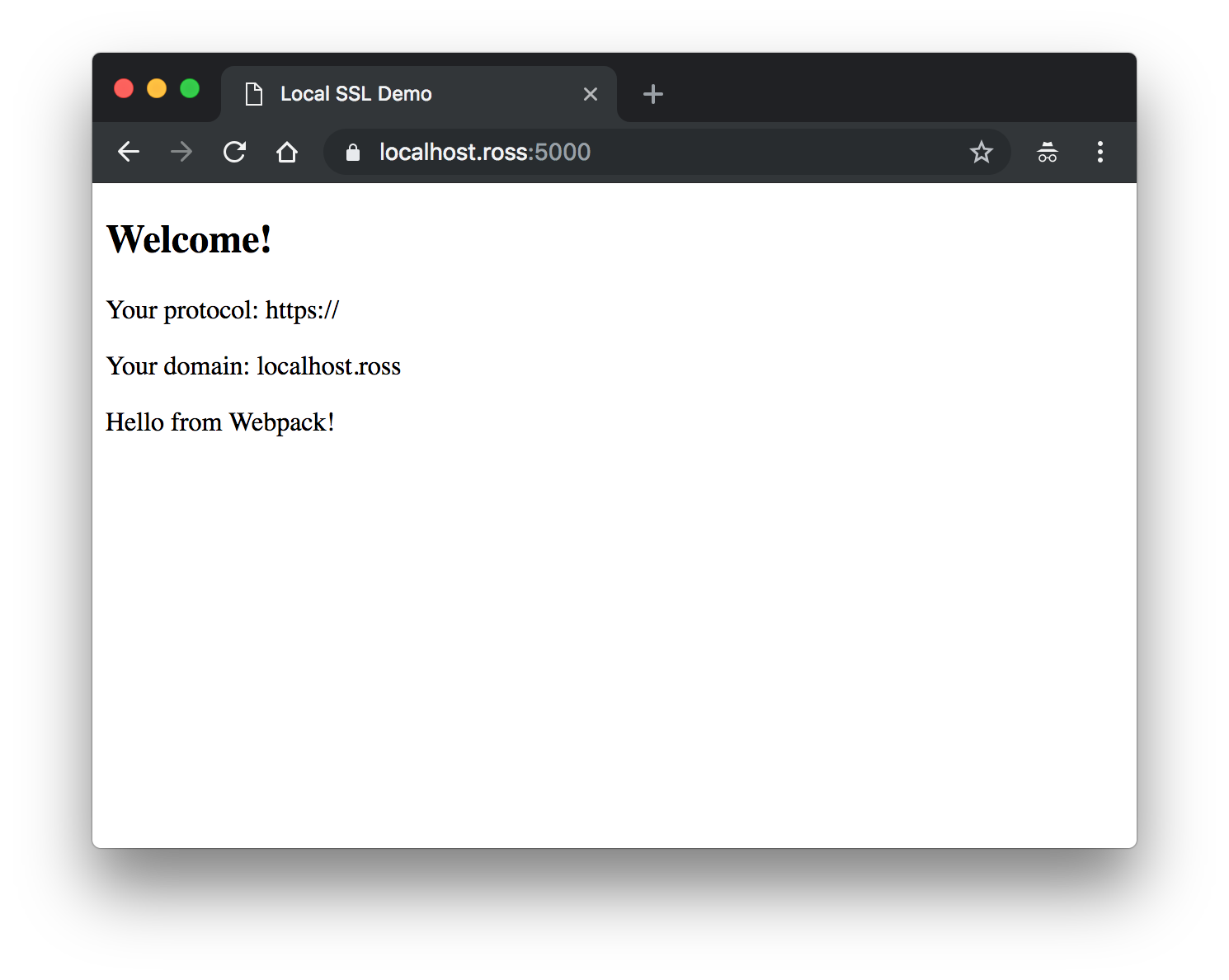 I so often get re-explaining from others that "localhost doesn't need local https". eyeroll.

this is not universally true. this tweet thread is the last time i'm gonna explain. henceforth it will just be linked to.

To summarize Kyle Simpson's Twitter rant, if your production app is on SSL, you want to develop on local SSL as well to test:

One knock against local SSL is that it has been considered a pain to set up. This post and the companion gitub repo, rossta/local-ssl-demo-rails, is intended to help make that task a little easier for Rails apps.

How does it work?

The general workflow I use for setting up my Rails applications for local SSL is as follows:

There are plenty of reasonable alternatives to this workflow.

Jed Schmidt's excellent How to set up stress-free SSL on an OSX development machine is also worth checking out; it walks through a similar setup for a Node.js server.

You could, instead of trusting certificates for each app you develop, create your own SSL certificate authority. The setup steps are more invovled, but once your local CA is trusted by browsers, you can skip the process of manually trusting each cert.

Or, use ngrok, a zero-configuration service for running your localhost server over a secure URL. While this approach may work well for local development, I currently don't know of anyone using it for tests or CI environments. Learn more on setting up ngrok from this post by Brian Rinaldi.

Resolve a domain name to localhost

To use SSL locally for a custom domain, i.e., something besides localhost, you'll need to find a way to route requests for that domain back to your local IP; for this post we'll assume the IP is 127.0.0.1. It may be something else if you're developing on a separate VM such as through Vagrant.

Here are a few alternatives for using a custom domain name for local development and tests.

The simplest approach is to add an entry for each domain you want to use to your /etc/hosts file.

The disadvantage is that /etc/hosts does not support wildcard domains, so you would need to add an entry for every unique domain you plan to use.

For more flexible approach, you may want to use dnsmasq to route arbitrary domain names wherever you want. In our case, we can use it to send all traffic on a custom tld back to our local machine.

The following script (adapted from Jed) will install and configure dnsmasq. The dnsmasq server will resolve all requests to the top level domain .ross on my local machine back to 127.0.0.1. (Replace $(whoami) with your preferred top-level domain):

Use a registered domain name

Or, purchase a domain and add A records to resolve the appex and wildcard subdomains to 127.0.0.1. This is the approach used by known "localhost" domains like lvh.me or xip.io.

The following script (adapted from Jed) will generate a self-signed certificate and private key for localhost.ross on my machine.

To generate a tld for a different domain, change localhost.$(whoami) to your own desired domain name. You can omit the line DNS.2 = *.$name if you don't need wildcard subdomains or if you're simply setting up SSL for localhost.

For Rails projects, I typically generate separate key/pairs using different domain names for each project and move each file pair to my Rails config directory:

On macOS, we can trust the certificate in the System Keychain with this one-liner.

There are a variety of blog posts out there that demonstrate how to do this manually through the Keychain application; that should work too.

Now that we have a trusted certificate, we can configure Puma with our key/certificate pair to serve local SSL requests for both development and test on our custom domain. (You could also use Nginx to proxy local requests and set up your Nginx config with your SSL certificate).

With puma, we can bind the server to an SSL url on startup by providing paths to the key/certificate pair generated in the previous step.

Now, when starting the rails server from the root of the project for local development, I'll specify the ssl binding as follows:

Since I use foreman to run my application locally, I'll place the command in the Procfile.dev file and substitute the port number with the $PORT variable:

Puma also provides a hook to set this binding in the config file.

If you're using webpack with the webpacker gem to bundle javascript and other static assets, you will want to connect to the webpack-dev-server in development over SSL. This can be done in the config/webpacker.yml file:

In recent versions of webpacker-dev-server, the SSL certificate is generated on your behalf; you may have to trust this certificate manually in Keychain separately to avoid invalid certificate errors in the browser.

Using our SSL certificates for local Rails testing is mostly relevant for system tests (aka acceptance or feature tests) where we would typically use Capybara to launch a real app server. Setting up Capybara to handle SSL requests has been painful, possibly involving some server monkeypatching to wire everything up.

As of Capybara >= 3.1.0, it's much easier to pass configuration to the underlying Puma server to include our SSL certificates (commit) using a binding similar to our startup command in development:

System tests also rely on a web driver to control the browser; in most cases, these web drivers will ignore the invalid certificate warnings. To get the newer headless versions of Chrome and Firefox to play nicely with SSL, I've found that some extra configuration is required.

First, let's use the webdrivers gem to make sure we have the latest binaries for chromedriver and geckodriver to test against Chrome and Firefox respectively.

We can switch to our new driver in RSpec with a hook like the following:

For Firefox, the driver configuration is similar:

With our server and drivers configured, we set our default Capybara app host with our custom domain on https:

Now we're set up to run system tests over SSL!

Below is a list of binaries and gems with the versions used in for the demo app. It may be possible to make this work with other relatively recent versions of these tools, though your mileage may vary.

And selected Ruby gems in the Gemfile:

Other versions of these tools may work fine. For example, Puma server configuration was added to Capybara as of 3.1.0 and chromedriver added support for the acceptInsecureCerts flag in 2.35/Chrome 65. Just be aware that possible issues may arise otherwise, as I found out by inadvertently using an older version of chromedriver.

I recommend the webdrivers gem as it will install the lastest driver binaries as needed on your behalf, including chromedriver for Chrome and geckodriver for Firefox. Many other posts may instruct you to install chromedriver with Homebrew or point to the chromedriver-helper gem; these may work just fine for you, though it will be up to you to keep the drivers updated.

If you're onboard with "SSL everywhere", let that include localhost as well. Getting SSL set up for Rails development and test requires a bit of effort, but it's easier than ever before with the introduction of Rails system tests and recent improvements to Puma, Capybara, Selenium, and the Chrome and Firefox web drivers.

This post explains why RSpec/Rails users should upgrade to Rails 5.1 and drop the DatabaseCleaner gem for JavaScript-enabled acceptance tests.

This post describes how to make enumerable methods that use blocks to iterate over an internal data structures but don't their enumerable properties and why this would be useful.

In this post, we describe the challenges we faced while replacing the Rails asset pipeline with webpack, how we solved those issues, and what we learned along the way.